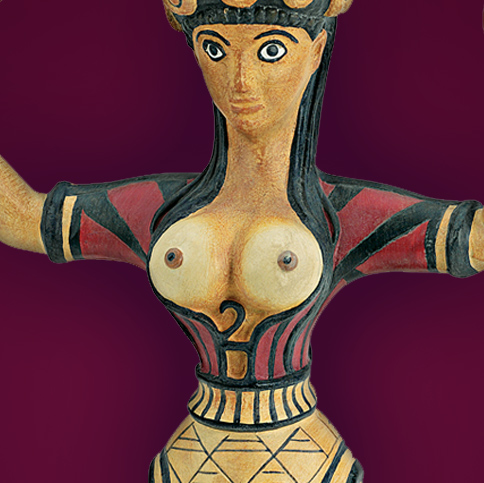 Elegant and attractive, the so-called “Snake Goddess” shows her femininity through features which are generally conferred within the domain of men: power and virility.

The 131/2 inches tall symmetric faïence figurine, dated 1600 BCE, was found (fragmented) in 1903 by the British archaeologist Sir Arthur Evans on the site of the of Knossos’ palace, in the Temple Repositories (Aegean Island of Crete.)

The Goddess appears as a slim yet shapely and very attractive woman. She’s dressed with a full skirt formed of seven overlapping flounces, each made by a series of colored square shaped tiles. Over the skirt she’s wearing a bronze tongue-shaped apron, which is supported by a girdle. While her shoulders are prudishly covered by a half-sleeve, her copious breast is completely unclothed, sustained by the tempting girdle. In all probability, corsets and girdles had a particular ritual meaning in Minoan culture, considering the great quantity of related references found in other statuettes, frescos, etc. The “Snake Goddess” breast and arms skin is candid white, while her face is golden-brown. Over her dark hair, she’s wearing a hat topped by a cat figure, sitting on it. The neck, the head, the hat and the cat are a much-discussed reconstruction, probably based upon the head of the other Snake Goddesses found during the excavations. The statue is in a standing pose; her arms are upraised and she firmly holds two snakes in her hands.

The snakes, the cat, her dark hair, and her eyes makeup suggest a connection with the Egyptians culture. According to Egyptians, cats were sacred animals associated with love, fertility and feast days. They also had a special significance once dead, in fact they were mummified, wrapped with linen, their head covered with a bronze mask, and placed into seated-cat shaped sarcophagus. Snakes, instead, were symbols of destruction at the service of the pharaoh, as they were intended to poison the enemies. Also, the afterlife was depicted by the Egyptians as a place full of snakes, associated with the Chaos threat.

THE SNAKE AS FEMININITY SYMBOL

The snake is used as symbol of femininity and persuasion in several literary, religious, and mythological works. As for instance, the Greek mythology figure of the Gorgon Medusa is described by Ovidio as a beautiful woman, with living venomous snakes in place of her hair (note how the relation between the Freudian fetish theory and the myth of Medusa is clear.) The Gorgon was able to transform into stone the men who looked directly into her eyes, captured by her charm. I hazard a guess on an emblematic connection between the “Snakes Goddess” and Medusa as they both are charming as well terrifying.

Another interesting work to consider is J. Milton’s “Paradise Lost.” Note how the snake and the woman are described in the following stanzas:

. . . thus the Orb he roam’d
With narrow search; and with inspection deep
Consider’d every Creature, which of all
Most opportune might serve his Wiles, and found
The Serpent suttlest Beast of all the Field.
(82-86)
Such Pleasure took the Serpent to behold
This Flourie Plat, the sweet recess of Eve
Thus earlie, thus alone; her Heav’nly forme
Angelic, but more soft, and Feminine, . . .
(455-458)

In the first quoted stanza, that is a plain reference from the Genesis book, the figure of the snake is illustrated as the more subtle creature in all creation. This match imply a consideration: are the modern religions trying to hide some spiritual and intellectual traits of the days of yore, such as the Minoan culture, that could be somehow connected to a more genuine knowledge? The latter stanza, instead, put the focus on the woman, her body and her Feminine (the capital F refers to the Sacred Feminine concept). The woman is depicted as a idle and carnal figure. In Milton’s work, several references on the breast as symbol of both desire and feeding suggest a connection with fertility. According to some scholars, the naked breast of the “Snake Goddess” is connected with fertility as well. Personally, I discard this hypothesis because of what previously told about the virility and the shrewdness shown by the Goddess opposed to the inactiveness of Eve’s intents. The Minoan Goddess approach towards the snake is active; Eve, instead, is a passive subject. An interesting theory about fertility-related topic is the one discussed by C. Witcombe, according to which:

This interpretation remains as a mostly spiritual supposition and cannot be taken as a obvious parallel. Despite it, this blood related notion strongly suggests a connection between the “Snake Goddess” and sacred rituals. Does she have a central position within the spiritual and religious sphere? May she be a priestess rather than a Goddess?

What can be assumed for sure is that none of the Minoan art shows woman as child-nurturers. Still it doesn’t mean they did not engage in domestic and maternal practices. Throughout the twentieth century, the rediscovery of a goddess-worshipping society leaded to the celebration of the great goddess and the Feminine, whom the Minoan Snake Goddess supposedly portrays. The “White Moon order”, an eclectic international order of women based in the US, recognize the “Snake Goddess” as the great All-Mother and created a ceremony to awaken the Minoan Goddess thorough a ritual bath with prayers in her honor.

The “Snake Goddess” is definitely a contrasting figure. Those contrasts, which are all related to the fascinating and charismatic ability of the Minoan woman, are mainly focused on the virility versus the femininity paradigm, which is represented in multiple ways: the delicacy of her skin versus the vigor of her arms; the elegance of her dress opposed to the brass of her naked breast; the revitalization symbolized by the snakes versus the death symbolized by the seated cat; the gracefulness of a thin body contrasting with the temptation of a buxom body; the lust after sexual instinct braked by the fear of the poisonous snakes.

Those are yet symbols and traces that let us think of the worship of female divinities in a matriarchy (or more likely a matriliny) based society, in which the woman was perceived as the personification of the spiritual world, and astute hedonistic-power holder.

The enigmatic Minoan seductress is now on display in the Herakleion Archaeological Museum (Crete Island, Greece.) 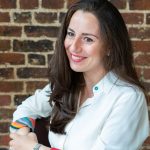